This is a post I made at the now almost extinct Wunderground blogs where I briefly describe one of my summer 2016 projects which consisted in refurbishing an old Davis Instruments weather station. Before Wunder Blogs disappear completely, I want to save this and use it as a first “real” post here. Later on I will do a proper entry and explain all the details regarding this setup and its whereabouts.

Personal Weather Station reporting as IZAPOPAN15 is a refurbished Davis Vantage Pro Plus + 24HR FARS working under Arduino + WizNet Ethernet shield. Original Davis ISS board was damaged and the console went missing long ago, that’s why I decided to run an Arduino as the new ISS board plus direct network connection capability for a very low price.

Here a picture of the Arduino ISS box during an in site code update: 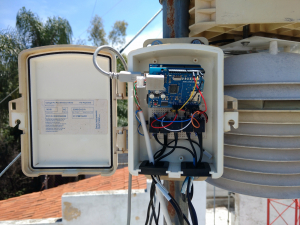 For the code, I heavily modified the one found here: cactus.io and added my own functions as well in order to adapt it to the current sensor suite available and of course my own needs. Thanks to Davis sensors documentation I was able to make most of the sensors work again and adjust their output values. For calibration I relied on the data reported from other 3 Davis VP2+ stations installed in the city. Data seems consistent since last calibration.

The station code is updated regularly to debug some issues or improve the Arduino performance.

EDIT: I will eventually post here all the process of making this project work they way it is now.

This site uses Akismet to reduce spam. Learn how your comment data is processed.